In extended celebration of the end of my January exams I have over-indulged. *slaps wrist*. I now have good reason to, I was rejected from Northampton, :(. But anyhoo, before this news, Andy and I went for a wee gander round Oxford, and I dragged him round loads of shoppies 🙂 so one has rather a lot to talk about. I’m going to stage this in blogs, since I don’t want anyone falling asleep from boredom on here.:P

I also had a nail disaster while making brownies for my Chemistry class, as no-one bothered to tell me that plain chocolate is a bugger to break for melting! I somehow managed to bend 7 of my nails past the quick, so now I not only have short yucky nails, I have short broken yucky nails. They are sooooore! 🙁 ah well, I hope they grow out soon. 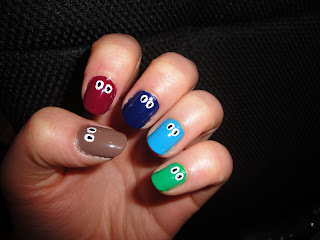 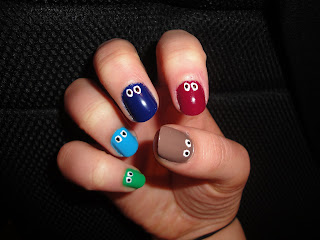 The same applies to the right hand but obviously starting from thumb to pinkie! 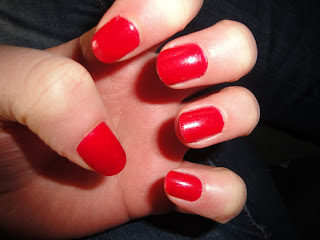 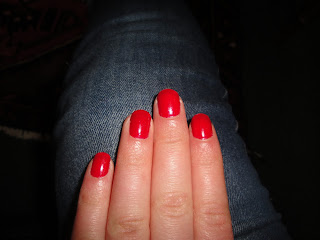 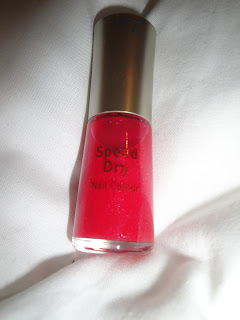 In the bottle!
So, if you look very closely on the nails in the first picture you can see the faint shimmer. It’s more obvious in the bottle, in which there are glitters that are silver and blue. I love the idea of the blue glitter as it gives the tiniest hint of duochrome, but not at all obvious.
The shimmer doesn’t translate amazingly to the nails, but I think this is partly due to the sheerness of the polish.  In the second picture you may see what I mean, I kid you not, that is 4-5 coats. And you can still see the whites of my nails! I tried a 6th on another nail after it chipped and that still wasn’t opaque, so I gave up. I think next time I will wear it over an opaque base.
As for the “Speed Dry”, I’m not convinced. I don’t own any other Speed Drys by No.7 so I can’t vouch for the name overall, but this polish has to be applied very thinly in order to benefit from a quicker drying time. Indeed, when I messily pasted a slightly-less-than-thin layer of Cherry Tang on one nail and a similar layer of the normal drying polish on another nail, the Cherry Tang took much longer to dry! So I wouldnt bother buying it for the fast-drying properties of this polish.
On a more positive note, the colour is absolutely stunning, it varies in different lights between pink, coral, red and orange. I just want to eat it! I couldn’t stop staring at my nails the whole time I wore it, so despite the sheerness I am absolutely so so glad that I bought it, and at such a naughty price! Who can complain 😀 The colour totally makes up for the pitfalls of this one.
I didn’t wear a topcoat, largely because I was so fed up of waiting for layer after layer to dry, so maybe that is why the tip wear is visible… possibly also aided by my paper round. I can’t really say much on the staying power since I only wore it for 2 days due to my incapacity to keep things the same, I was just itching to get another colour on my nails!
Pleased with the colours of No.7 polishes as a whole, more on that later 🙂
Hope the week treated everyone well!
Emma xxx
Disclaimer: Everything mentioned in this blog post was either bought by myself with my own money, or given to me as a gift from friends/relatives. All opinions expressed here are my own.

Barry M L'Oreal Nail Art No.7 Rio Nail Art 2011-02-04
+Emma Greenwood
Share !
Previous: A Little Shoe Shop and a Clipper Teeeea
Next: My experimental (as usual) face of the day :)

Welcome to Imagination In Colour! My name is Emma and this website is a small extension of my mind :)... If you want to find out more about me, click here!